This soup was a total accident. And also one of the greatest tasting meals I’ve made in a long time.

It’s so funny how that works, sometimes. You have this vision in your head of what you want it to taste/smell/look like, and then you realize that just is not going to happen. Or maybe this just happens to me…

I never follow a recipe completely. This is likely the reason that I am not a good baker- I don’t bother to really measure out a lot of things that I should measure out, and my experiments sometimes fall flat (literally.) Mostly I just add more vegetables and less salt to dishes that I see on various social media sites. (Pinterest, Instagram, or Snapchat)

A note about Snapchat. I used to never watch the “Discover” Snaps (Buzzfeed, CNN, ViceNews, Food Network, Cosmo, etc) but now I am completely hooked on TasteMade’s Discover Snapchat. And every single thing that I’ve made so far from it, including last nights Miso Brown Butter Pasta (check my Instagram for that one), has been delicious.

But this recipe, I found on Pinterest 🙂 Pinterest is great for these types of things, as well as how to clean gum off your shoes, make-up contour tutorials, and snowman cotton swabs- to name a few. But one thing I do like about Pinterest, is that its algorithms are (mostly) in tune with your current interests. Mine has evolved from a feed packed with chocolate desserts and fluffy cats in its infancy to what it is now- mostly healthy meals (now more and more vegetarian/vegan) along with yoga inspiration, nutrition infographics, and the occasional lifestyle article about periods or something.

So the original recipe I was somewhat intending to make was Lentil Chili from Little Broken which caught my eye on my Pinterest feed, which I have a bit more discretion on now. I had purchased about all of the necessary items, when I decided to add beans into the mix. While I respected the idea of a full-blown lentil chili, I felt like beans would have given me the actual chili experience, still without having meat in it. (PS: I’m a liiiittle bit vegetarian at the moment, well really plant-based. check my previous posts for more info). I also thought it was interesting that the recipe was focused so entirely on being meatless, but why ditch the beans too?

Side Note: I actually googled “Meatless Meatballs” recently for the dinner I’m planning on making tomorrow. So yeah, Meatless Meatballs are apparently a thing, stay tuned for how that goes.

So adding beans was my first addition. Then I realized I didn’t have chili powder. I didn’t think it would be a huge deal to just use cayenne instead, but after tasting it, I realized it didn’t have the flavor I wanted. So I added cumin, hoping that it would give it a little deeper body. This was the turning point for the nationality of this soup. The cumin did help, but it gave it a real Hispanic flavor (along with perfectly seasoning the onion and red bell pepper). Mexican food is basically my favorite, and I might honestly have previously stated that Tortilla Soup is my favorite soup. HOWEVER, this is my new favorite soup!

Rich, flavorful, satisfying soup. It’s a real thing. And it doesn’t have to be loaded with fat, I’m looking at you, Loaded Baked Potato Soup. 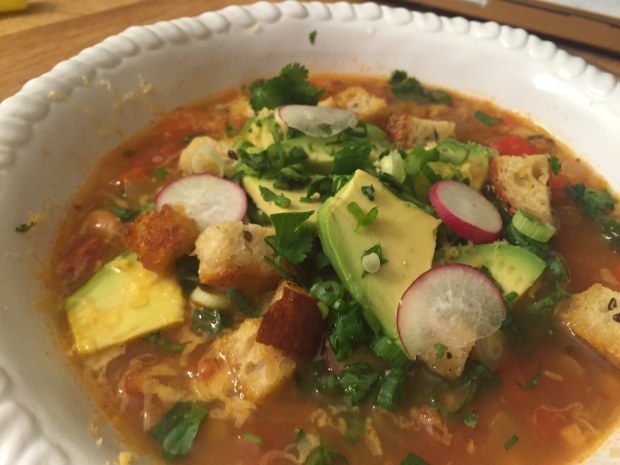 While I may have strayed from the original recipe, I did follow her lead on “thickening soup with soup” aka: taking a little of the soup out, pureeing it in the food processor, and adding it back to the soup for thickness.

That was definitely the move.

So are the toppings. I used what I had on hand- avocado, thinly sliced radish, cilantro, cheddar cheese, scallions, and croutons. I’d definitely recommend something crunchy (tortilla chips would be good, I had bread laying around so I made some croutons) as well as something creamy (sour cream, avocado, cheese) and something green (sliced green onion, cilantro, etc.). 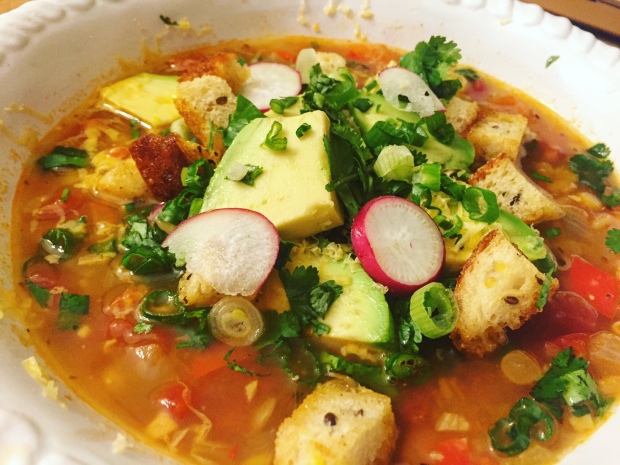 Ingredients: (Feeds 4- Double up if you’re bringing to a party. They’ll thank you later)

One thought on “Mexican Lentil Chili”